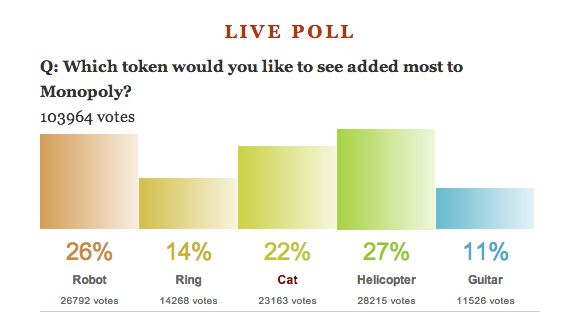 Monopoly unveiled a cat as a replacement for the iron game piece. I’ve never given it much thought before but the iron seemed like a strange choice for a game about rampant capitalism. I guess it could represent the idea that you could start off as a piece worker and then become a mogul but it could also represent a worker being gentrified out of their house as the top hat or car driving developer bought up property around them.

Anyway there was an online contest to rename them and The Atlantic notes that the robot and helicopter were clear favorites. Cats are wily so it must have silently crept up somewhere for the win.  If that wasn’t really the case though wonder if there will be any backlash.